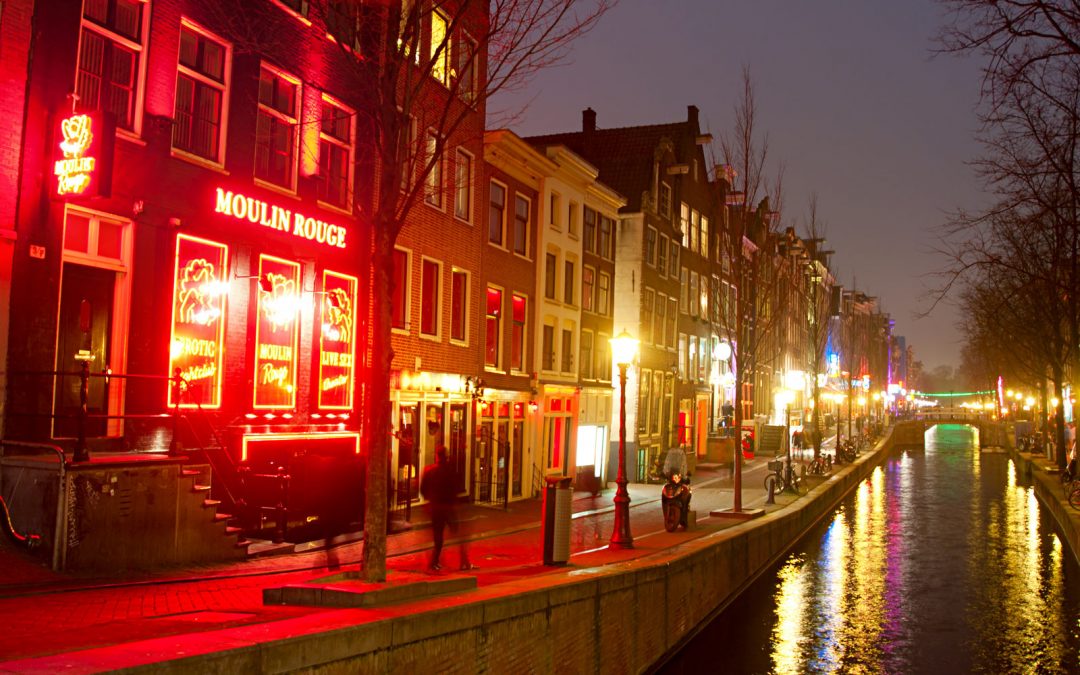 The Oldest Profession in the Freest City in the World: A History of the “Red Light District” in Amsterdam

Amsterdam is an amazing city where you can find and try everything your heart desires! And the most interesting is that even the hottest entertainment is completely legal! The “Red Light District” is an area that attracts millions of tourists to the Dutch capital every year. It looks somewhat dull and common in the light of day, in order to flirt with vicious lights under cover of night! …

HISTORY OF THE RED LIGHT DISTRICT IN AMSTERDAM

The Red Light District is one of Amsterdam’s most famous attractions. It is located almost in the very center of the city, and since 1811 prostitutes have been living and working on its streets.
De Wallen is the heart of the Red Light District in Amsterdam. In fact, this is not even a street or a quarter, but a whole city filled with red-violet neon signs, glass windows with female silhouettes, entertainment venues, monuments, and museums.

The De Wallen quarter consists of a network of lanes where one-room apartments with showcases are located. Priestesses of love rent them for sexual favors. The name of the quarter comes from lamps that lit the windows in brothels. As a rule, they were red. So passers-by understood that in this house they could receive a portion of love – naturally, for a good fee. Prostitution was legalized in Amsterdam by the French after the occupation of 1811 and was considered legal for 100 years.

The total area of the quarter is 6500 m2. On its territory, more than 900 workers and employees
of the love business are traded. Most of them are directly selling their body. The rest work as security guards or as staff.

On the north side, De Valen is bounded by Lange Niezel. In the east – the sea dam and the Nieuwmarkt market. In the south – the borders are outlined by Sint Jansstraat street. In the west – by Warmoesstraat. In total, about 20 streets are part of the Red Light District.

An interesting fact is that at one of the block’s borders the oldest church in the capital is found – the 800-year-old “Old Church” (in Dutch: Oude Kerk).

FORBIDDEN FETUS (THE HISTORY OF PROSTITUTION IN AMSTERDAM)

The main distinguishing feature of Holland and especially Amsterdam is the so-called “window prostitution”. Along the streets illuminated by red lights, glass windows are built-in which semi-naked bodies flash 7 days a week and 24 hours a day.

Prostitution was legalized in Amsterdam by the French after the occupation of 1811 and was considered legal for 100 years. In 1911 it was again outlawed. Rather, a resolution was passed by parliament that prohibited brothels and pimping, but the sale of one’s own body actually remained legal. In 1988, prostitution in the Netherlands was recognized as a profession.

In 2000, brothels in the Netherlands were recognized as completely legal. Sex workers are still not allowed to call clients on the street, so they are standing outside the windows and inviting
them to come in. In February 2019, Amsterdam passed a law prohibiting tourists from looking too frankly at girls,
screaming, taking drugs or alcohol in the Red Light District.

The surroundings of such windows are beauties dressed up in bold bikinis and heels. If a young lady is vacant, then her window is open for review. At the same time, the girl can do quite ordinary things – to invigorate herself with coffee and cigarettes, or maybe watch passers-by with a lovely smile.

A special relish of the “window gallery” is the variety of choices. You can see behind a glass a girl of any age (within the law, of course), skin color and physique. If the lady liked the cavalier, then he can open the glass door and agree on the cost of entertainment. If the transaction was successful, then the client is allowed inside, and the curtain on the window is pulled.

Some beauties go to work in the morning, however, two-thirds of the windows will be closed during daylight hours. And De Wallen himself in the daylight looks less colorful – just the alleys of houses with shop windows, nestling against one of the city canals.

By 11 o’clock in the evening, the quarter, like Cinderella, from a simpleton turns into a brilliant beauty.

The dark water of the canals looks like a bottomless abyss, on the surface of which multi-colored neon lights are reflected. Ladies, dress up in outfits of a more frank cut and predatory colors.

The best time to visit the Red Light District is somewhere between 4 pm and 2 am.

A visit to a glass cabin can cost a different amount, and it depends on which class the girl looked after the client.

Also, the price is determined by the time of the day, the cost of rent and the choice of services. If you really average, then a half-hour visit to the “window” will cost between 100 and 150 euros for 30 minutes.
Although, statistics show that most of the guests do not stay longer than 15-20 minutes. The starting price for negotiations is usually 50 euros for 10 minutes.

Raging, downloading rights and taking pictures on the streets of De Wallen is troublesome. The guard responds to the slightest call of the nocturnal butterflies and severely calls upon the rebels to answer.

By the way, the red light city is ready to offer strawberries not only to heterosexuals. One of the glass alleys is a transgender fishing ground. But male prostitutes are more likely to work on-call than to stand behind glass. Female prostitution is slightly cheaper, in view of the great variety.

The biggest Tourist Attractions of the Red Light District
The city of red light district is the same attraction in Amsterdam, as many historical monuments. Most tourists come here to stare at the piquant sight, which is a huge bonus along with the services of the priestess of love.

Bronze Monument the “Belle”
Along Oudekerksplein Street, opposite the Old Church, there is a bronze monument bearing the playful name Belle. It is dedicated to all female sex workers. Another piece of modern culture is a monument to the female breast, playfully cluttering among the pavers of nearby bronze beauty.
How to get there?
By tram: No. 4,9,16 (Tram Westzijde, Centraal Station, Dam, Spui (Rokin), Muntplein stops)
By bus: No. 18,21,22,48,170,172,174,248,272,755,757 (Centraal Station, Dam, Spui (Rokin))
By subway: by train No. 51,53,54 (Nieuwmarkt station)

“Condomerie” Store
Another attraction of De Wallen is the Condomerie condom store. And this is not just a dull pharmacy with a dozen varieties of rubber products. No – this is the whole Kingdom of Condoms! Opened in 1987, this institution expanded the range of goods and services offered.

As of today, sophisticated and humorously designed multi-level stores offers: condoms of all textures, colors, and sizes. Lubricants for every taste. Sexual hygiene products. Various gifts and souvenirs decorated in the theme of the store. All sorts of interesting contraception. Also, in the territory of Condomerie, men will be taught to correctly evaluate their sizes and choose a rubber “little thing” for themselves. The history of the origin of condoms and fun facts about them are also reflected in the walls of this miracle store.

Optional
Ubergirls Amsterdam
One of the most exciting and elite escort agency in the Red Light District is called Ubergirls Amsterdam. If you are looking for VIP sex-services from VIP escort girls, then Ubergirls is the right choice. They will treat you like royalty and you`ll receive all the attention of the most beautiful priestesses of love in Amsterdam.